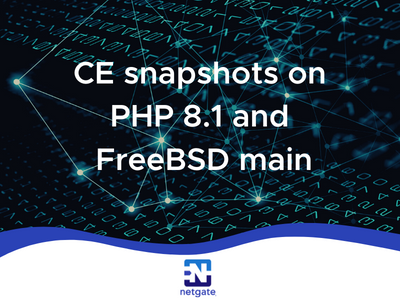 As we announced earlier this week, pfSense software is moving to a base of FreeBSD main and PHP 8.1. Starting today, we will have early pfSense CE software development snapshots available for community members who want to start testing these changes.

We have made an effort to address many common issues with the initial push to FreeBSD main and PHP 8.1 and have reached a state at which we are reasonably certain that things are ready for wider testing. There are still known issues, and we fully expect there to be additional issues we have not yet identified. Due to large variations in existing user configurations and environments, it’s likely that users will encounter issues that our internal testing did not uncover.

The following problems may prevent some users from upgrading to or using current development snapshots:

With the move to FreeBSD main, the kernel ABI changed, which makes it hard for pkg to pick up changes. Since the newly compiled packages are using a different ABI, by default pkg prevents the user from installing software from the repository to prevent breaking the installation. We pushed a fix to pfSense-upgrade on the 2.6.0 branch to work around this, but users already on 2.7.0 snapshots may not be able to obtain the fix as-is.

Before performing this upgrade, it is critical to have a fallback plan in place and to perform the upgrade in the safest manner possible.

Reminder: These are development snapshots for testing in lab conditions. They are not production ready. Do not attempt to upgrade remote systems with these snapshots as they may fail and become unreachable.

When following the procedures in the next sections, attempt the upgrade from the GUI first. If it fails or won’t complete an update check, try from a shell, for example:

First, try the procedure above, but select the stable branch first to try obtaining the fix. If that works, then use that method.

If that fails, try the following procedure:

If the upgrade fails to complete or check from the GUI or the shell using the above procedures, start a new thread on the CE 2.7.0 Development Snapshots category of the Netgate Forum and include the full output of the pkg and pfSense-upgrade commands as run from the shell and also include the contents of /conf/upgrade_log.latest.txt.

Try a fresh install of 2.7.0 to see if that works, and restore the backup without packages.

If that fails, reinstall 2.6.0 and restore the full backup.

Test as many things as possible! Please report any errors encountered in the CE 2.7.0 Development Snapshots category of the Netgate Forum.

If the system will not boot after the upgrade, please include all of the information on the console, such as error messages or at least how far into the boot process it progressed. Include information about the system, such as whether it boots BIOS or UEFI, and if the installation was using UFS or ZFS.

If a system reports a PHP error, please include the full error message and, if possible, a portion of the system configuration for the problem area. For example, if there is a PHP error in the captive portal code, include the captive portal section of the configuration file with any private information masked (not removed!). For example, replace a private value with “xxxxx” instead of removing it entirely or removing the tag. If there is no section in the configuration file for that feature, mention that as well.

If a system experiences a kernel panic, please include as much of the information from the textdump as possible, at least the backtrace and end of the kernel message buffer. The full textdump may contain sensitive information so it’s best to inspect the contents first before posting.

If a system experiences a non-fatal backtrace such as a Lock Order Reversal (LOR), those can typically be ignored as they are not immediately harmful, but they should still be reported. Please include the entire LOR backtrace from the logs on the forum post designated for LOR reports.